The second British Dressage Bronze Championships proved a massive hit with the competitors who all judged new venue Sheepgate Equestrian ‘well worth the journey’ after two days of battle across Prelim to Advanced Medium.

The Prelim title is headed to Wales, Carmarthenshire to be exact, as 12 year old Bryley Llewelyn took the championship with her own eye catching skewbald Cwmtyysswg Will (pictured above), who she lovingly refers to as Will I Am, in homage to the star judge on The Voice, a favourite in her music collection. Bryley has had Will for two years and has produced him herself. They enjoy doing a bit of everything and compete with the Pony Club as well as their BD career.

Bryley and Will were the overnight leaders after a fantastic day one score of 70.27% but it was tight on Sunday when Rebecca Lock and Brickell Mr Pickwick pushed them hard and won the test on 68.79%. However, the Welsh duo’s 68.05% was enough to secure the win, but by just 0.85%.

After her win, Bryley said; “He felt a little tired today so I did have to use my legs a bit more but yesterday’s test felt perfect!”
Bryley enjoys maths and art at school – two great subjects to help with any budding dressage rider!

A duo taking some time out from eventing claimed a dominant victory in the Novice division. Gloucestershire rider Steph Woolley and the British bred Freckleton Matador, by Monte Carlo, topped the leaderboard on both days with two great scores (pictured below). Saturday it was 70.75% and on Sunday, they cruised to a 72.31% which gave them a clear victory over Grace Lynch and Jara H. All of this on top of winning Friday’s Petplan Equine Novice Bronze Area Festival at Sheepgate!

Steph has had the now 11 year old since he was two when she bought him from breeder Penny Roots at the small Wawickshire stud whose prefix his name bears and this is their first full season with BD.

“He’s just fab, I love him to bits. He’s not always been the most straightforward though. We evented together but at the moment he’s just lost his love for the cross country so I decided to focus on our dressage this year,” said Steph. “I have to say a huge thanks to Rob Barker who we’ve started having lessons with and he’s made a huge difference.”

Far from resting on their laurels, the duo has a busy few weeks to come with the Riding Club Championships at Lincoln, an Area Festival Final at Fieldhouse, Riding Club Dressage to Music Championships and they’re hoping for selection to represent her region at the Home International at Wellington.

The Elementary crown went to another horse and rider combination who’ve moved their focus to dressage from eventing. Dutch-born rider Hente Dorhout-Meers returned to riding after taking a long break for university, getting married and having children. In her teen years, she worked in a dressage yard but then her life’s focus changed. Once children were older and riding horses themselves she rediscovered her love of riding and purchased Troef van de Vive la Vie as an eventing schoolmaster.

‘Doodle’ was bred to show jump but went on to event to advanced level before Hente got him but veterinary issues have now forced a focus on dressage – and the change has clearly suited them both. The rich chestnut was a winner on both days, scoring 70.75% on Saturday which was followed by 69.43% on Sunday.

Hente said; “The first day he was really good; calm and rideable but today he was more himself and just a bit stressy. We’re lucky he’s here really as we nearly lost him to kidney failure last year and he’s had a few bone chips which means he can’t jump or gallop anymore so dressage is his new job. I just adore this horse!”

So what are the plans for the future? “We’ve done one Medium and would like to do more next year so perhaps work towards the Regionals at Elementary and Area Festivals at Medium,” Hente added.

The win was special…but came at a cost! “I said that if I won, I’d buy my daughter a new tailcoat she spotted so we’re off to pay Tack and Togs a visit!” laughed Hente.

Runners up were Hampshire’s Deanne Courtnadge and the Ace of Spaces on a total of 137.70.

It was a worthwhile journey from Kent for Roberta Collyer and her talented Jazz son Fiasco II when they claimed the Medium title. Roberta, who runs RC Equine Bodyworks, started riding as a child but made dressage her choice aged 14.

She and Fiasco dominated the Medium ranks over the weekend, winning on both days. A great 68.91% got their campaign underway on day one and this was followed with an impressive 71.06% on Sunday which gave them the coveted winner’s sash and rosette by over 6% ahead of nearest rivals, Sophie Bennett riding Vallon du Rock.

“We’ve really loved it here! It’s a six hour journey but has been worth it,” enthused Roberta.

“I’ve had the ride on him for three years but bought him outright this year. He was a very hot youngster, a typical Jazz but everything is just now clicking into play. Getting to these championships was a goal for the season so to win is amazing,” she added.

And she’s got high hopes for Fiasco, “I’d really love to get him to Grand Prix – I hope he’s got it in him! We’ve just started the changes which can be exciting but whatever I ask, he always tries his heart out,” she ended.

The final section, Advanced Medium, was a popular win for local rider Alice Elliott and her lovable British bred Chatsworth Chieftain, who live just 17 miles away from Sheepgate and are regulars at the centre. They’ve been together for seven years and have risen up the ranks from Prelim and they’ve made a few attempts at Prix St Georges. Alice has competed a horse every year with British Dressage since 1999 but this is the first horse she’s got to this level.

Saturday’s Advanced Medium was claimed by Tyler Bradshaw and Igor VIII but they couldn’t hold their advantage on day two, allowing Alice and ‘Murph’ to take the title after they topped the class having been second on Saturday. Abi Uden pulled up with Rain Dance to be reserve champions.

“I’ve had an absolutely fantastic couple of days. He’s a shire cross and gives you everything he can. He’s taken me to places I never dreamed I’d get to! We’ve done a couple of PSGs but that’s as far as I’ll take him. I’m looking at getting a youngster – even a my age!” quipped Alice.

Thanks to everyone who made these championships possible! The Sheepgate team pulled out all the stops on the back of a busy Petplan Equine Area Festival show to make sure everyone was welcome and the competition ran like clockwork. All weekend there was a tremendous atmosphere with a huge sense of camaraderie – so well done to our riders, officials and volunteers. 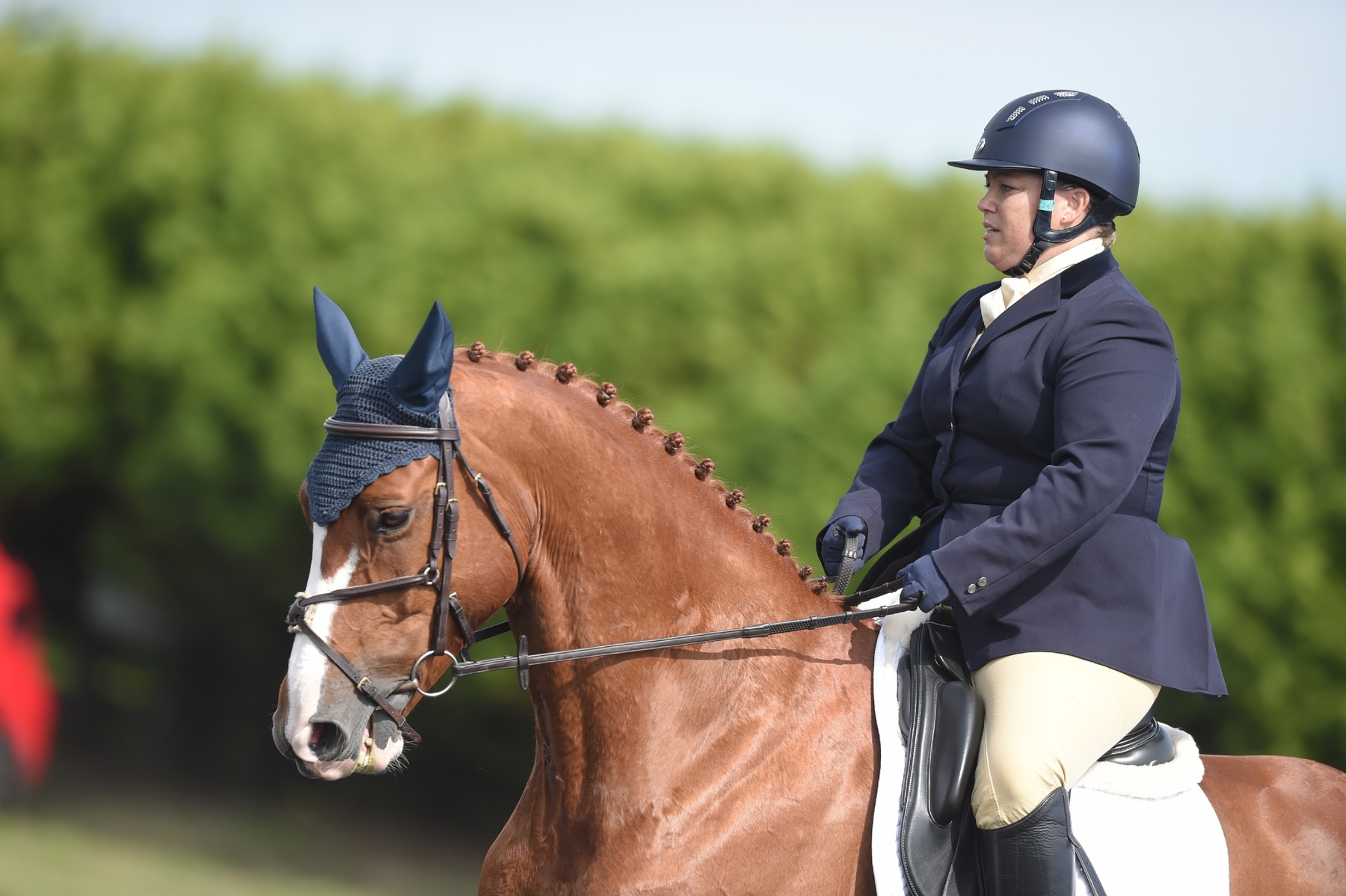